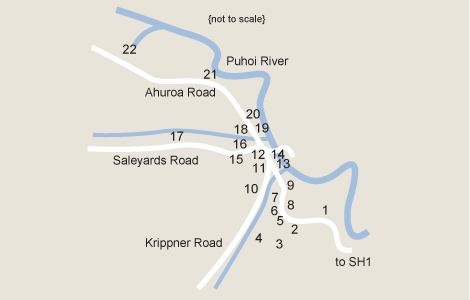 A walking guide to Puhoi Village’s historical sites with maps and brief notes to points of interest.

Erected for the 90-year celebrations in 1953 in memory of the settlers.

Built in 1923 in competition with the Public School (11), closed in 1964 because of a falling roll. Now houses the Museum.

Built in 1906 as parish priest’s residence.

5. Church of Saints Peter and Paul

6. Site of the first presbytery

Part of the 90-year celebrations, planted by descendants of the pioneers to beautify the church grounds.

Memorial erected in 1988 to commemorate the site where two nikau whare (huts) were built to house the first settlers.

A school house stood on this site from 1874. Captain Krippner was the village’s first postmaster (the Post Office was housed here), and his wife the first teacher. The present house was built in 1884.

11. Site of the first Public School

Built in 1872, and closed in 1923 when the competing Convent School opened. It later served as the village hall. The building there now was originally a wharf shed.

The first store on this site was opened in 1878 by John Schollum. Destroyed by fire in 1939, and replaced by the present store.
Read more about Puhoi Village Store

Erected circa 1913 to house the Roads Board, empowered to rate residents in order to finance road building. In 1923 it became the Library, but the contents were destroyed in the 1924 flood. It reopened as a Library in 1976.
Read more about Puhoi Town Library

14. Site of the Wharf and Wharf Sheds

The wharf was Puhoi’s lifeline (photo 4) until the main road improved in the 1920’s. A regular service brought supplies and took produce to the Auckland market. In the 1924 flood, one wharf shed floated away and sank. The other now stands on the opposite side of the road.
Read more about Historic Wharf

A hotel on this site opened in 1879. It was replaced by the present building in 1900. The current Hotel Bar contains a display of artefacts and historical photos.
Read more about Puhoi Hotel

The first hotel in Puhoi opened in 1876. Various stable buildings, essential in the days of horse drawn traffic, have been on this site since then.

17. Site of Saleyards and Cattle Dip

The first cattle sale was held in Puhoi on September 29th 1877 in a paddock. The saleyards were opened around the turn of the century. All cattle moving south had to be dipped at Puhoi to eradicate tick. This cattle dip was opened around 1922.

18. Site of the first Tennis Courts

Widely used during the 1920’s, these courts were subject to persistent flooding. The new courts in the domain opened in 1948. Puhoi River Motors now occupies the site.

A large two storey building opened here in 1876. The boarding house closed during the Great Depression.

Built 1907 as a homestead, for many years a cafe/tea rooms, but now a private residence again.

Land was designated from the first days of settlement, and bylaws drawn up in 1892. Most pioneers are buried in the cemetery.
Read more about Cemetery
For more information: