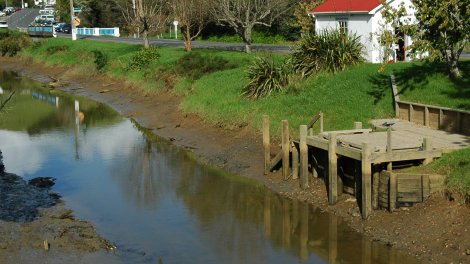 Come to Puhoi by boat, but check the tide first

River traffic was once vital for Puhoi. All income generated by the growing village once depended on trade with Auckland. So, around 1880 a first small wharf was built on the river bank to enable a steamer to tie up. This was replaced by a more substantial structure, which included two solid storage sheds. The great flood of 1924 swept away the Puhoi wharf, but a smaller commemorative structure was built where the original wharf was situated.

Now, the Puhoi Historical wharf is one of the wharves and jetties linking Auckland with the coastal communities of Rodney. The wharf, seven kilometres inland, connects Puhoi to sea by providing a safe mooring for small crafts as well as kayaks.