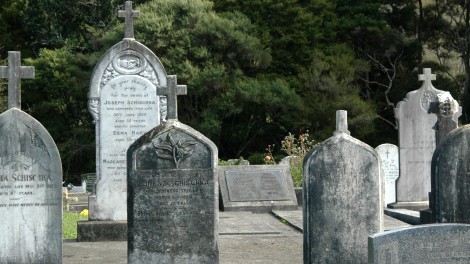 The graves of many of Puhoi’s pioneers are found in the cemetery which is located on the outskirts of the village on the road to Ahuroa.

The land was allocated for the cemetery right from the first days of the settlement. However it was unfenced and the very early graves were becoming lost in undergrowth and the original simple wooden crosses were deteriorating and becoming illegible by the time a public meeting was called in Puhoi in 1892 to have it tidied up and to adopt proper bylaws.

In the early days the coffin would be carried by the pall bearers without pause from the church to the cemetery followed by the procession of mourners.In 1922 a long desired hearse was obtained resplendent with brass knobs and railings, plumes and glass doors which was drawn by the two horses normally pulling the Puhoi to Ahuroa mail coach.