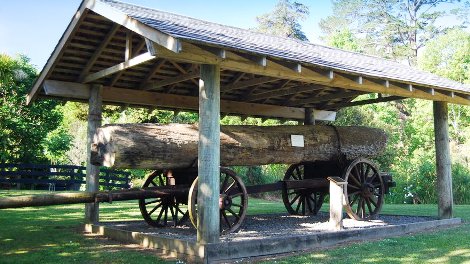 Log drays played a very important role in early days of Puhoi. These wagons pulled by 12 bullocks were used to move heavy logs out of the bush down to the banks of the Puhoi River ready to be towed to Auckland.

One of the few surviving drays and its shelter was moved back to Puhoi. After the restoration of the dray and shelter it was officially opened in 2006.

Also the log on the dray tells a story. It sunk to the bed of the river in the early days. After it was retrieved it was transported and secured onto the dray.