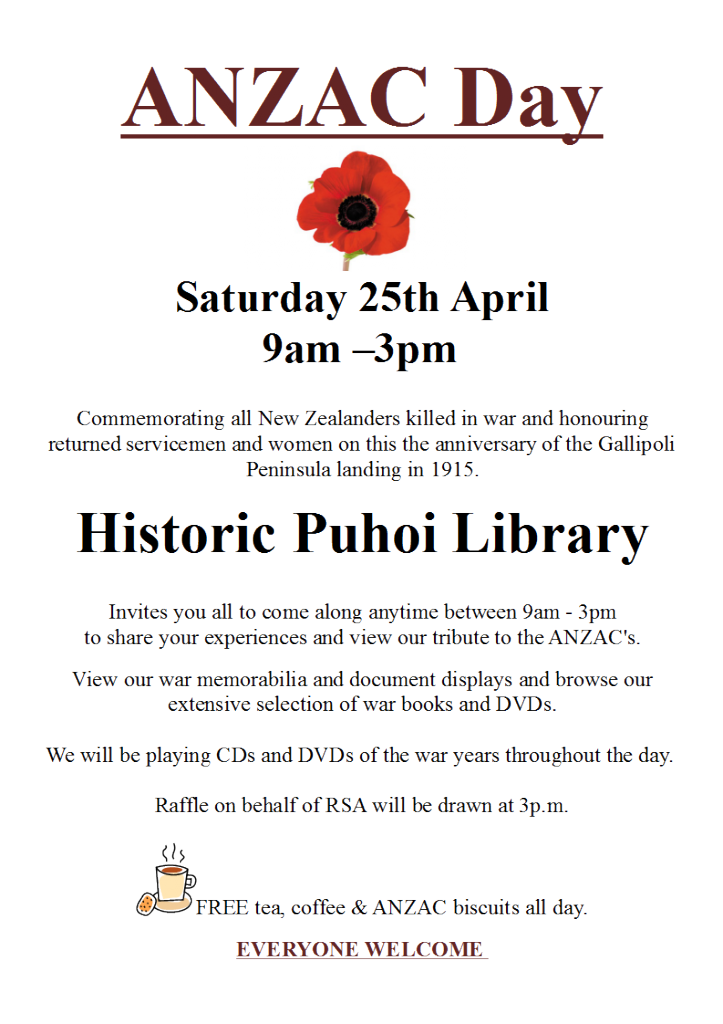 The library will close on Sunday 21nd Dec. until Thursday 1st Jan.

(We will, however, try to open for the odd day during this period when staff available)

Open every day in January.

Keep an eye out from this Monday, December 8, for Puhoi Library’s famous annual Christmas season lights, on show until January 6. And young readers, have you remembered the library’s Under 16 Reading Challenge? Read five books by December 19 to enter the December 20 draw to win a family movie pass, plus age-related consolation prizes. Pick up your entry form from the library. 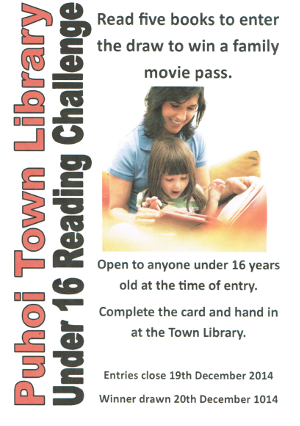 Living it up in the Library

The library, with its new manager, Helen Darnell, is settling into a year of monthly themes and display changes. Volunteer librarian Sue May organised a display to coincide with the interna- tional day of celebration of women, March 8, while we have Mary Fitzgibbon to thank for the display, running throughout March and tieng in with St Patrick’s Day, of books about Ireland, including a primer of Gaelic, which may not be the first choice of languages on my list to study, with all deference to the Celts in our community. The April theme, which the library does so well, will be Anzac Day, and will draw on its quite special collection, including books, artefacts, newspapers and other documents, to commemo- rate the soldiers and sacrifices of the two world wars. I for one look forward to the Anzac biscuits which also makes that day special down at the library. Opening hours that day are from 10am to 4pm. Look for poppy and raffle ticket sales in advance, to be drawn on Anzac Day, with book, DVD, and Bohemian bottled beer prizes. Funds raised from the raffle will be donated to Wark- worth RSA. The theme for May will be Extreme Endeavours, and, of course, Sir Edmund Hillary will be tops that month. On March 27 trials begin on Thursday evening opening hours for those out of town during usual daytime hours. In June the theme will be Matariki, the start of the Maori New Year, with links to the Bohemian founders of the European settlement of Puhoi on June 29 1863.

Our congratulations to Helen Darnell and the library volunteers
for the terrific start to their celebrations of 100 years of the build-
ing’s life last weekend and the two days of exhibits, during
which many of the identities and characters associated with the
building when it was still a Roads Board office, and later, when it
became a library. Many of us were thrilled to recognise old
friends among the more modern photographs.

Puhoi Library will be generously donating your late return fines to the new Puhoi Fire Station.

The little library with the big heart now has its book catalogue searchable and online, book reviews and more – take a look!