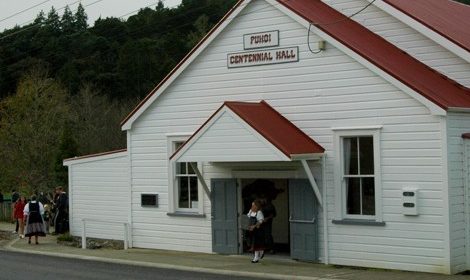 Have you got a community idea, event, gathering, opportunity that you could use the hall for? This could be something like Dance Classes, Jumble Sale, Kids Disco, Open Mic, Art Exhibition, Table Tennis, Yoga, Art & Craft and Live Music.You could be an organisation, an individual or group that has a great idea for something special and need a venue, while at the same time help us increase our hall society membership of at least 10. The Puhoi hall is paying it forward by offering FREE HALL HIRE, all you need to do is apply in writing to the committee with the following information.1. Tell us about you, your organisation, or group.2. How will free hall hire benefit you?3. How will it benefit the wider community?4. How will you go about making it a success?5. What do you hope to achieve by having this event?6. How do you propose to increase our membership?7. When you hope to be able to use the hall?We are looking for something that we feel meets the needs of the community, this could be a one-off event or a series of smaller events and will benefit as many people as possible. Hall membership is $10 per family or household, and could be added to any fee you choose to charge attendees of your event or stall holders etc.A successful applicant will be decided by the hall committee, the booking date and times will be made by our booking officer by mutual agreement with the successful applicant. Bond payment and our usual T&C will still apply.Send your application letter to puhoihall@gmail.com Applications close on July 31st.

The Puhoi Centennial Hall Committee would like to thank everyone for their fabulous support at the Quiz night held in the nick of time before the latest lockdown. It was wonderful to see the Hall filled with friends and neighbours enjoying themselves. A special thanks to the local businesses that very generously donated goods or services for prizes. These include The Puhoi Pub, Puhoi Valley Cheese, Puhoi Canoes, New World Orewa, Sausages by Design Silverdale and Mike Smith for making the Cheese boards. We managed to raise about $1,600.00 which will help with the general running of the Hall and maintenance. The Hall Committee put a great deal of time and effort into organising everything,  but without your support it would not have been a success. If I have forgotten to thank somebody I apologise, but be assured that your support is very much appreciated. Kind Regards Val Smith Hall Sec.

Message from the Hall Committee

The Puhoi Centennial Hall Committee would like to thank everyone for their wonderful support and generosity at the recent Race Night Event.
We made a total of $1475.00 on the night and should clear at least $1300.00 after the expenses have been paid.
A special thank you to Pat Backley for carrying the very heavy “Race Pack” in her hand luggage on her last journey back from to the UK.
We had very generous sponsors for the Race night including :
Gillian, Amigo and team from the Puhoi Pub, Michelle from Puhoi Beauty, Stacey from Soulistic, Roger Davies,  Greg from Shimano,  George and Kate from Puhoi River Canoe Hire, Nick and Jo from Puhoi General Store, Pat and Fran from Gunners Restaurant,  Sheryl from Slow Water Trading,  Bev from Orata Oysters,  Jo from Puhoi Cottage Tearooms,  Alex and Iryna from Puhoi Organic Distillery,  Anthony and all the team at Orewa Life Pharmacy (Tamariki Ave).
We would also like to thank Kate for the loan of the projector from Orewa College and  Andy Tait for the loan of the microphone.
A special thank you goes to Mike Swain and Jenny for technical assistance and All of the committee for all their hard work organising and clearing up after the event.
On the night there were too many raffles to mention all the winners, but the big raffle that was in the store was won by Val Smith. Door prize Mary Fitzgibbon. Best Hat was won by Sheryl Papprill and Andy Tait.
Once again I would like to thank you all for your support. If I have forgotten to mention anyone I apologise but please be assured that your support and generosity is very much appreciated.
Kind Regards Val Smith (Secretary)

Puhoi Centennial Hall AGM 29th May 7pm at the Hall

Please come and support your local Hall. It belongs to us.
We need your help to maintain our beautiful building.
New to the area? Come and meet some of your neighbours.

Attached is a Membership Form for you to print out – please consider becoming a member and supporting our hall, even if you can’t make the meeting.

[via Larry Mitchell]
Our public information session is confirmed for March 12th, 11 PM to 2 PM in the Puhoi Memorial Hall. Here is your chance to become “better informed” as to our plans.
On Behalf of the Steering Group of the Puhoi Heritage Little Village Project.
Larry Mitchell 09 4220598 (Spokesperson).

The Puhoi Hall committee would like to thank everyone for their support for the “Race Night” fundraiser for the Puhoi Centennial Hall which was held in November.
We would like to thank all the sponsors who came up with wonderful prizes for the “Race Horse Owners” or were added to the wonderful raffle prize. Special thanks to Pat Backley who came up with the idea and managed to fit the kit in her luggage travelling back from London.
The sponsers included Puhoi Canoes, Waiwera Hot Pools , Sugar loaf Waiwera, Puhoi Organic Distillery, Puhoi Pub, Puhoi Cheese Cafe, Puhoi General Store, Puhoi Beauty, Table 19 Warkworth RSA, Lothlorien Wine, Pat and Graham Backley. Val and Mike Smith Pat and Fran Endemann and Judy Lyons plus any one else who I may have failed to mention . Please be assured that your donation was really appreciated. Thank you to all the committee members who worked so hard, and the community for attending the race meeting and/or buying raffle tickets. We managed to raise $1276.30 for the Hall plus $ 50 for the Puhoi Fire Brigade. The raffle was won by Judy Lyons.
The money will go to help pay for general expenses and towards the upgrading of the kitchen.
May we wish you all a Peaceful, Healthy and Happy 2017.

Get Your Glad Rags On

A very warm welcome and thanks for attending the Puhoi Centennial Hall’s Annual General Meeting.

Once again I am extremely grateful to our team of dedicated Committee Members.

This Heritage Hall would have to be one of Puhoi’s most valuable community assets and as a committee we all feel privileged to be part of it.

The hall is used for such a variety of activities, Dancing, Concerts, Art Shows, Badminton, Scouts, Funerals, Weddings, Birthday Parties Meetings and also the base for an emergency centre.

Our main objective as a committee this last year was to concentrate replacing the roof on the hall with new iron before April 2015. And I am proud to say this has been achieved. The work was under taken by Simon Straka and his team, plus our committee member Cody Mankelow overseeing the project. We were unsure until the old roof was removed as to whether we would have to replace any rotten timber. But I am pleased to say other than the iron, nothing needed replacing, A big” thank -you” to Simon, his crew and Cody.

We also renewed the spouting at the same- time, this made sense to do it there and then while we had the scaffolding in place. And new piles were replaced under the corner of the kitchen.

A good proportion of the money for the roof was received from Grants, the Lottery Board Commision,$10,000, The Rodney Heritage Fund $8,000 this amount will only be available to us in July.

I would like to thank those previous Bohemians for a hall well built 140 years ago. It can rain as much as it likes now and we should have no worries about leaks.

We also had a smaller amount of money granted, $3,500 from The Old Rodney Council This was money they had surplus and had to be spent before the end of their financial year, so 11 Community Halls benefitted by this grant.

Maintenance is always on going and we have several projects we want to achieve before very long, the up grading of our kitchen, improve bathroom vanities with hot water and upgrade heating requirements in the hall.

This last year was a challenge for us as a committee trying to organize community events. I can assure you we did try very hard working around bookings as to when the hall was available, and then only to find it was going to clash with other Puhoi Community activities, as a result not a lot happened on our part and I do apologise.

Back in Nov we were approached by Daniel a local who works at the Puhoi Pub who wanted to put on a community dance in honour of his late friend Ewen Gilmour a comedian from West Auckland. The proceeds going to the Variety Bash Trust,which is an organization that raises money for kiwi kids. And the hall would profit above a certain amount of tickets sold. This evening was well patronized and everyone enjoyed themselves, as a result the hall benefitted from a $1000.00 for which we were most grateful for.

On Sunday May the 3rd we as a committee invited the local people of Puhoi to our Roof Shout, this was our way of saying thank you to everyone who has been supporting the hall with our fund raising over the years and to help encourage new people to the district to become members and see our most valuable asset..

We provided light refreshments, barbequed sausages………and Gillian from the hotel kindly helped us out with a discount on the beverages. The afternoon was lovely and warm and was well attended.

Our hall is proving to be popular all the time with bookings well ahead into the following year.

This hall is owned by the Community of Puhoi; as a result we have to continually fund raise for its upkeep. But this is one of the things that makes Puhoi unique is that we have this lovely country community for people to live and work in.

Thanks again to Judith for all the reporting she has done for us and to Derek Hay for auditing our financial books for 2014/2015.

And finally a Very Big Thank you to my fellow officers and Committee, who have worked so hard and the people of Puhoi and surrounding district for your support.

For anyone thinking of joining our Committee our monthly meetings are held on the last Wed of the month at 7-30pm and are normally finished by 9pm.

[via Val Smith]
The Puhoi Hall Committee would like to invite everyone to The Puhoi Centennial Hall on Sunday 3rd May between 2.30 pm – 6 pm to celebrate the completion of the re-roofing of the Hall.

The committee would like to thank the community for their on going support in fund raising events which help maintain the hall to such a high standard.

Come along and meet your neighbours and enjoy your beautiful hall.

Light refreshments will be provided.

Kind Regards and thanks
Val 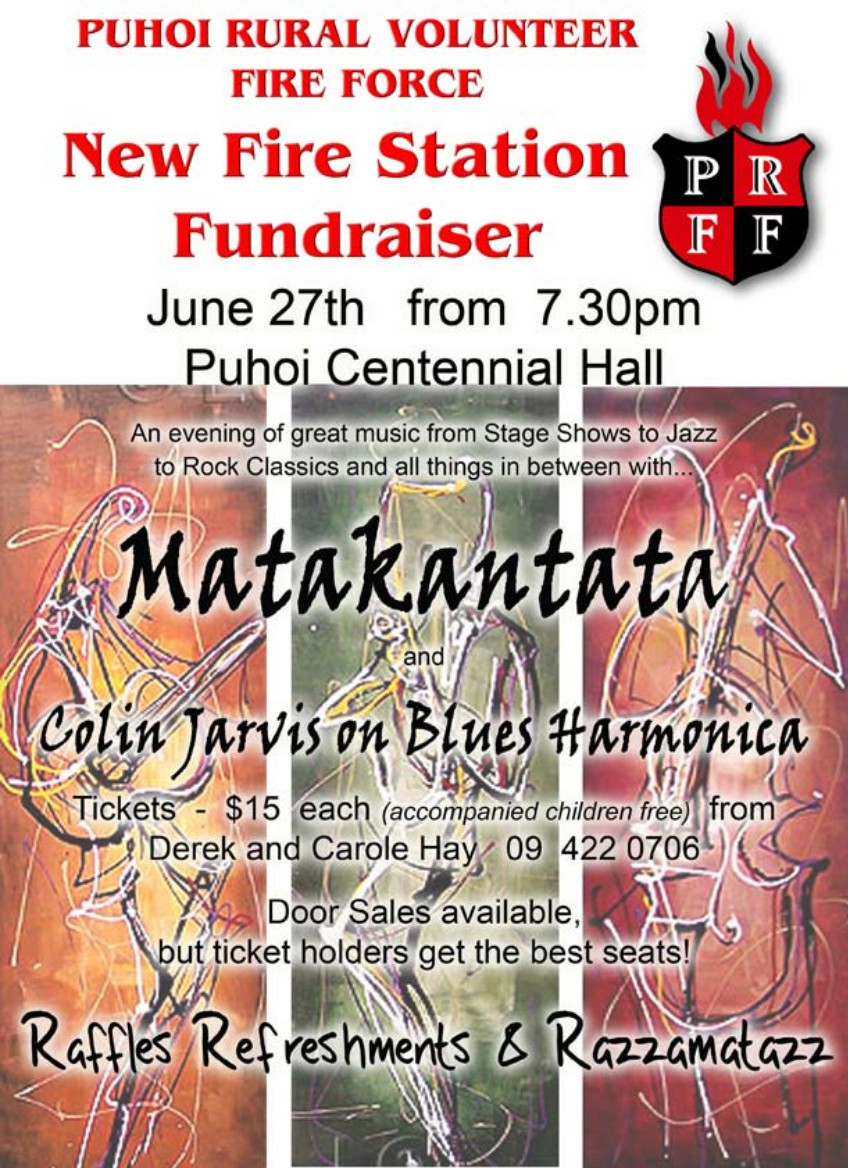