AT have confirmed the following timetable for sealing Ahuroa Road:

Expectation that at $5 million per annum there will be enough budget.

I am still communicating with the powers to be on why they are not allocating more of our money on road sealing. Shane Ellison the CEO of AT has admitted that is has been diverted into higher priority projects like the City Rail Link. AT reduced what seemed like a $12.1 million allocation (the Mayor announced $121 million over 10 years) to $4.7 million this year and $5 million next year. It appears that AT are “uncontrolled” and are to blame for the lack of road sealing progress. Either the Mayor and Auckland Council have lost control of AT or they are both in cohorts misleading the Rodney Rural public.

Unfortunately, unless we do something about it, our side roads will not be sealed within our lifetime, but downtown Auckland will be fabulous! Think about it every time you fill up with gas with the RFT or paying the new Local Target Transport Rate. Us rural people are being screwed by Auckland Council and Auckland Transport.

I will give a more informed update shortly. 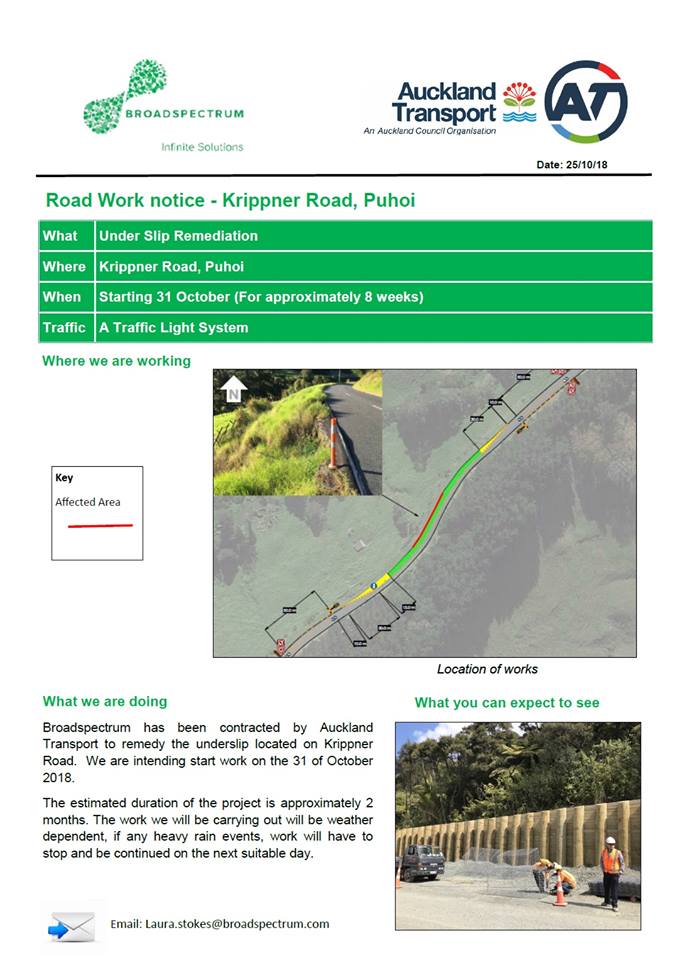 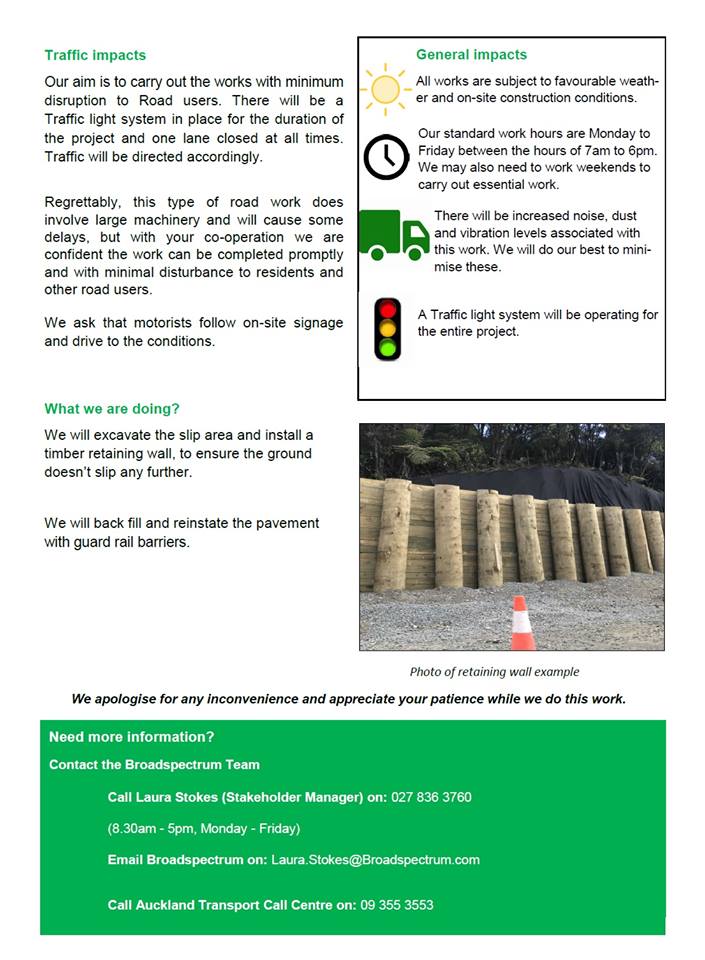 You’ll notice that some of Puhoi’s much needed road sealing projects now appear on Auckland Transport’s priority list. Currently Ahuroa Road comes in at No 4 and is ‘Under Design’. Watch this space…https://at.govt.nz/about-us/asset-maintenance/road-sealing/priority-list-of-unsealed-roads/

Puhoi Park and Ride: What Do You Think?

With the proposed new bus services between Warkworth and Silverdale, there is a possibility of stop at the toll booth  area before the tunnels. This would allow a sort of ‘Park and Ride’ for Puhoi users. It’d be a 2km walk from the centre of the village with no footpath, so perhaps not a viable ‘bus service’ as such – but still could be a useful and cheap way of getting a bus into town if you can drive to the stop. Beth Houlbrooke (Local Board chair) is canvassing local opinion on this idea, so please get in touch with her with your thoughts so she can gauge support.

Beth says its unlikely that a more convenient stop for Puhoi (e.g. in the village or even at the gravel area across SH1) would be considered in the short term, but showing a need for a service will get us ‘on the radar’, especially as otherwise they might consider routing it down the new motorway later, with no possibility of a Puhoi stop as there’s no northbound entry/southbound exit [my thoughts – Mike]!

Please get in touch with Beth at beth.houlbrooke@aucklandcouncil.govt.nz or on Facebook. There is a now a poll on the Puhoi Village People facebook page to register your interest too.

Find out what all those cones are about…

Puhoi is often used to film scenes requiring a heritage backdrop – I guess it looks a bit like New England but it’s cheaper. The odd traffic hold up is well worth the exchanging for the fame in my opinion – we were a bit late getting warning of the latest one, but the attached Activity Proposal makes an interesting read anyway! The filming is intended to end on Sunday may go on until Monday if the weather holds it up.

Fed Up With Risking Your Life? 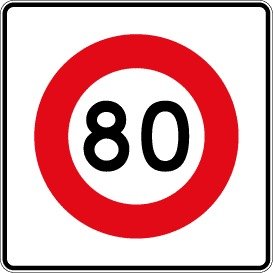 Andy Finch of AT has sent me the detailed spreadsheet of the unsealed road priority.

From this spreadsheet it is easy to derive the length of time before a road is sealed. Simply accumulate the estimated cost and divide by the annual sealing budget ($3.4 million – targeted transport levy).

Here are the results in years before the following roads are sealed:

Ahuroa has had no capital infrastructure since 2010 and the future looks grim under the present regime.

It makes one wonder why Ahuroa ratepayers are paying their rates? Auckland Council and Auckland Transport are diverting our rate money into the CBD and City Rail link. Obviously of no use to us, we cannot even connect to public transport.

Elections are coming soon and it is time to think about Local Board members and Councilors that will support Rural Rodney and stop the centric Super City spending.

From: Andy Finch (AT) [mailto:Andy.Finch@at.govt.nz]

Subject: RE: Sealing of Ahuroa Road

Thank you for your email dated 30 June. I apologise for the delay in replying.

As requested I attach the spreadsheet used by Auckland Transport to prioritise the unsealed road network for sealing. This spreadsheet does not include an analysis of the specific length of time that will pass before a road will obtain funding for sealing. I believe that this would be misleading as any calculation would need to make assumptions around the level of funding to be identified for seal extensions in the Long Term Plan to be published in 2018 and subsequent iterations. It would also need to assume an average cost of sealing which may or may not be realised across the entire sealing programme.

I am aware of your concerns regarding the summarising of a number of unsealed road sections on the same road into one line on the spreadsheet. I addressed this in my response to you dated 13 May 2016. An updated prioritised list fully addressing this issue will be published early 2017.

The point you have made regarding rates and the targeted transport levy would be better addressed by Auckland Council.

Thanks for the reply (below)

The analysis that supports the road sealing priority list used to be on the AT website. It would be useful if you could send me that spreadsheet (as per your offer). I believe that it would be very easy to assess the time it will take to complete any and all unsealed roads.

From your detailed analysis of each road section (I have the old spreadsheet before it was taken off the AT web site) we know the Km to be sealed and the priority order. We know that the annual budget for extension road sealing is $1.4 million per annum. We know that road sealing costs $1 million per Km. Thus only 1.4 Km will get sealed per year. You could add a couple of columns to your detailed spreadsheet to calculate the years to completion of each section. Not hard. If AT cannot do this, then send me the latest detailed spreadsheet and I will provide the spreadsheet calculations free of charge.

Thus given that the lowest priority of a section of the Ahuroa Rd is 147 then from you old detailed spreadsheet it will take 40 years to complete! Side roads will take 300 to 800 years to be sealed.

I believe AT are deliberately misleading the public by publishing only the summary spreadsheet. Several residents of Ahuroa now think that the Ahuroa Road sealing is going to be completed in the near future given it is a priority 6 (which in fact is only a small section of .41Km).

An honest publication of the timeframe for road sealing extensions on the AT website would be a better approach. That would provide ratepayers, councillors, AC staff and AT staff with accurate information from which a debate can be held.

Perhaps AT and AC do not wish to be drawn into public debate and wish to continue diverting Ahuroa rates into CBD congestion issues funding instead of improving our local Ahuroa infrastructure. Ahuroa rates should provide Ahuroa infrastructure according to the Local Bodies Act. Rural Rodney is being neglected by the Centric Super City. Ahuroa has had no capital infrastructure since being forced into the Super City. The reason we pay rates is to sustain and improve our local environment, certainly not to fund downtown projects, 80 Km away that have no benefit to us.

Why are Ahuroa ratepayers paying a three year targeted transport levy when there is absolutely no benefit to our area? I believe that AC and AT are in breach of the Local Bodies Act.

Thank you for your correspondence regarding the updated road sealing priority list published early 2016.

As you have identified this updated list aggregated all unsealed sections of Ahuroa Road. These are detailed on the attachment to this letter. It is probable that the three sections with the highest priority will be aggregated and sealed together.

It is difficult to assess how long it will take to seal Ahuroa Road in its entirety. The funding for seal extensions over the period 2015 to 2018 has been set along with the programme for delivery of the highest priority projects. However, the next Council Long Term Plan will be published in 2018. This will identify future funding for seal extensions and accordingly determine the level of sealing that can achieved over the subsequent 3 years.

The analysis that supports the sealing priority list would be better demonstrated. Please contact me if you would like to take up this offer and this can then be arranged.